Old city Hall built on an artificial island in the middle of the Regnitz river and is connected to the banks of the Lower bridges (Untere Brücke) and Upper (Untere Brücke). 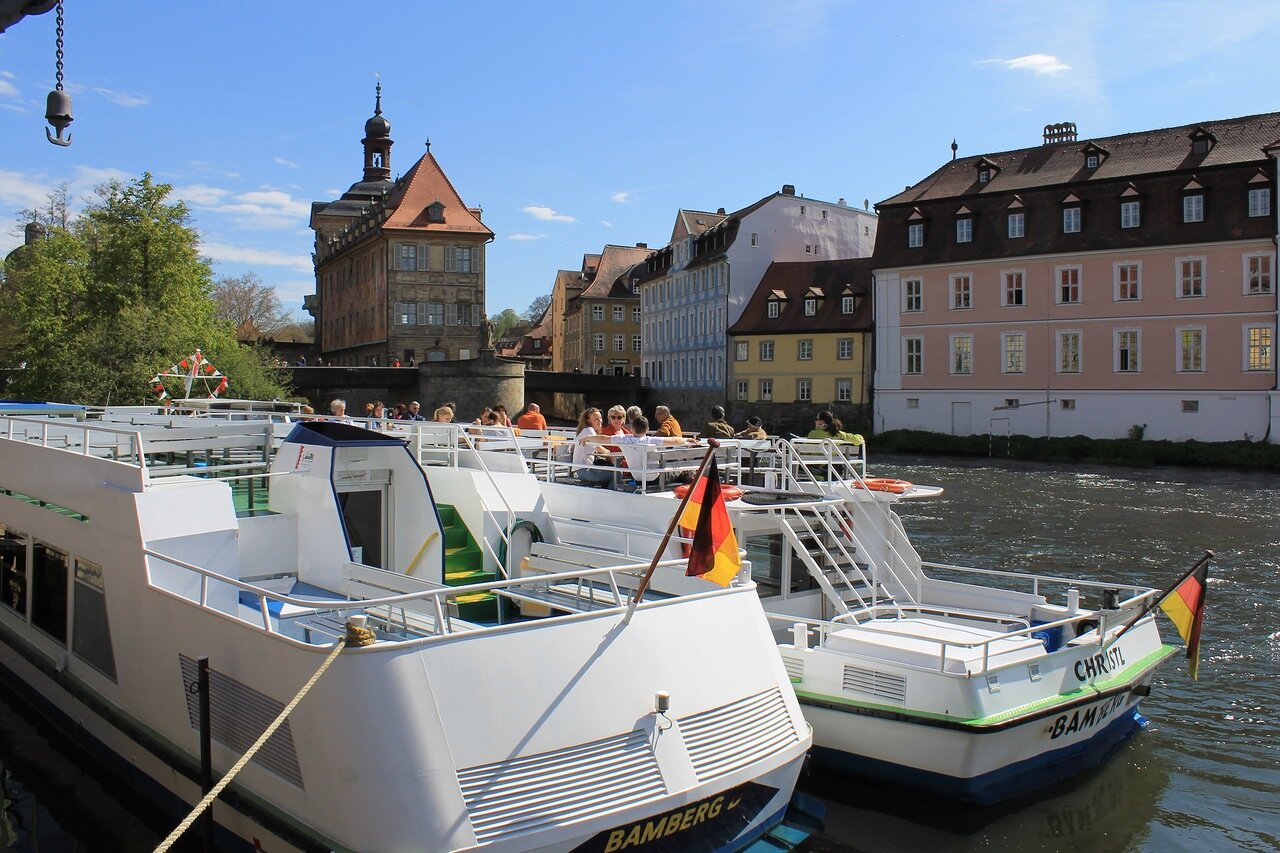 Above the parapet of the North side of the town Hall it stands a statue of Saint Cunegonde of Luxembourg (St. Kunigunda), the patron of Bamberg. Kunigunda, wife of Henry II - the first Queen of Germany, mentioned in historical documents. During the reign of the family laid the Foundation of the German state. When seriously ill wife after his death Kunigunde had to deal with the state office, as a result, she has earned a reputation as a fair ruler who care about the needs of citizens. The king founded in Bamberg the bishopric, intended for conversion to Christianity of the Eastern lands, for which Henry II called Bamberg "Franconian Rome".Kunigunda received Bamberg in the year 1007 as a wedding gift from her husband . The Queen has used personal funds, including widow inheritance for city needs. Kunigunda was canonized as a result of this story: the couple had no children, because in the day of the wedding Kunigunda took a vow of chastity (actually it is hampered health of the spouses). However, there were rumors about her adultery. To dispel rumors Kunigunda took a severe test - stand his bare feet on the red-hot ploughshare. This story was popular in Church painting. The current monument is a copy of one of the 6 statues of the saints standing on the bridge before the flood 1784. The last legend attributes Kunigunde save the city from being bombed by allied aircraft during the Second world war. During bombers raids Queen "covered the city by means of cloak of fog". However, the bridge Unter brücke was destroyed, was injured and urban neighborhoods, although not as much as other German city. Thanks to this Bamberg became included to list of world heritage of the UNESCO. 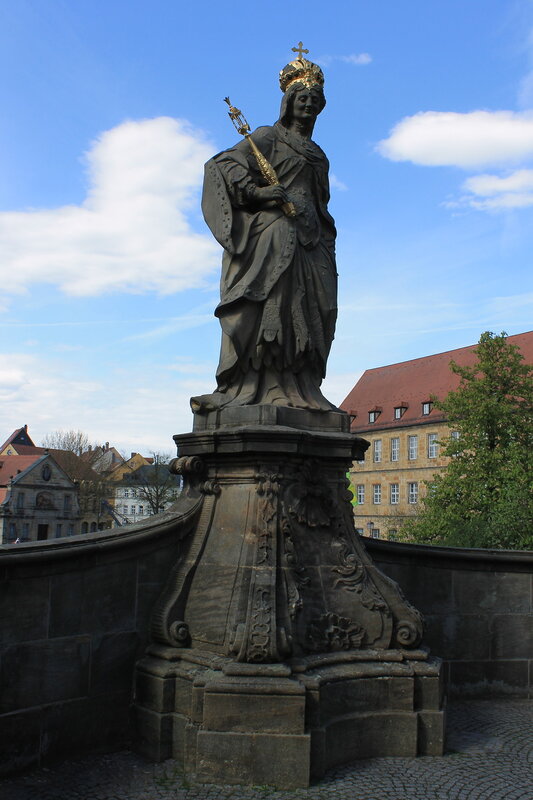 From Kunigunda wonderful view of the downstream of the river Regnitz. 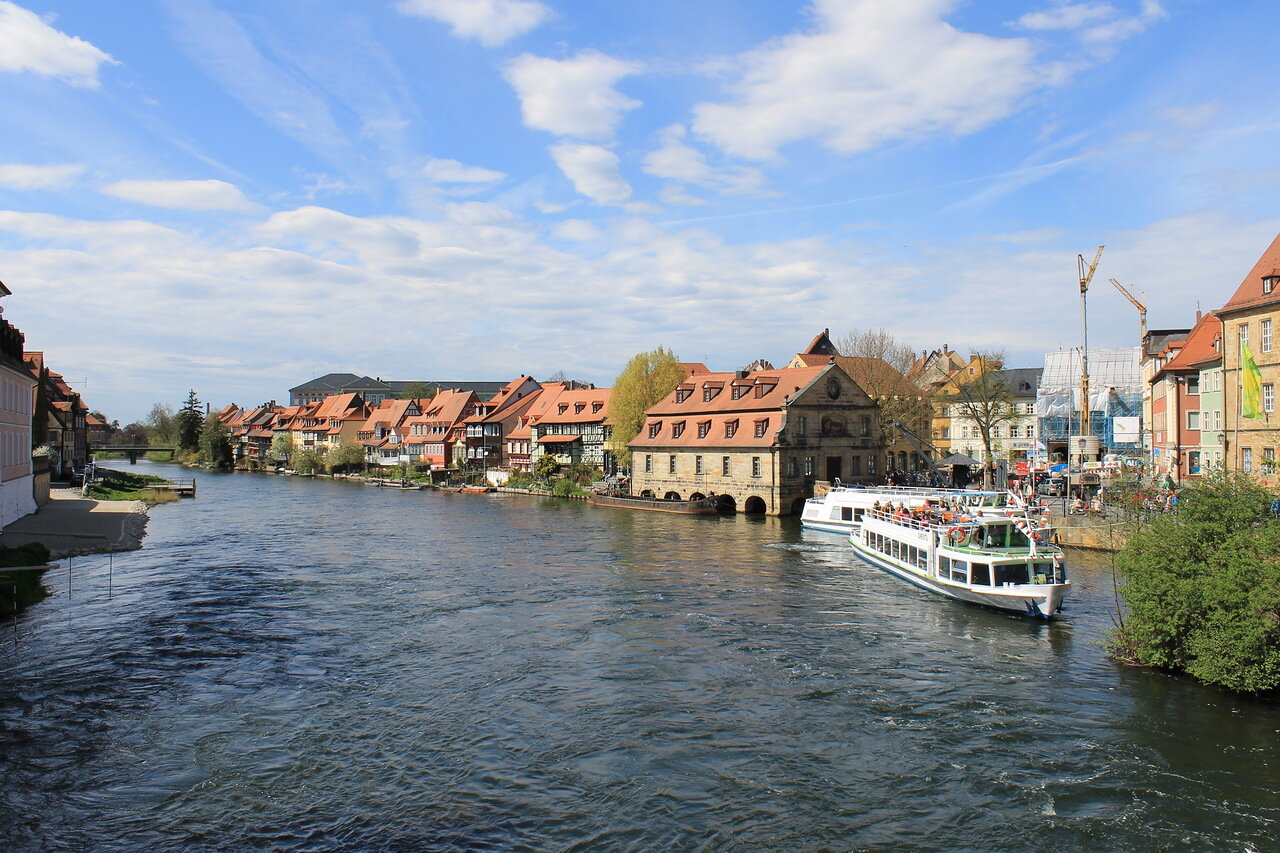 The Old slaughterhouse became the first building of Bamberg's University. 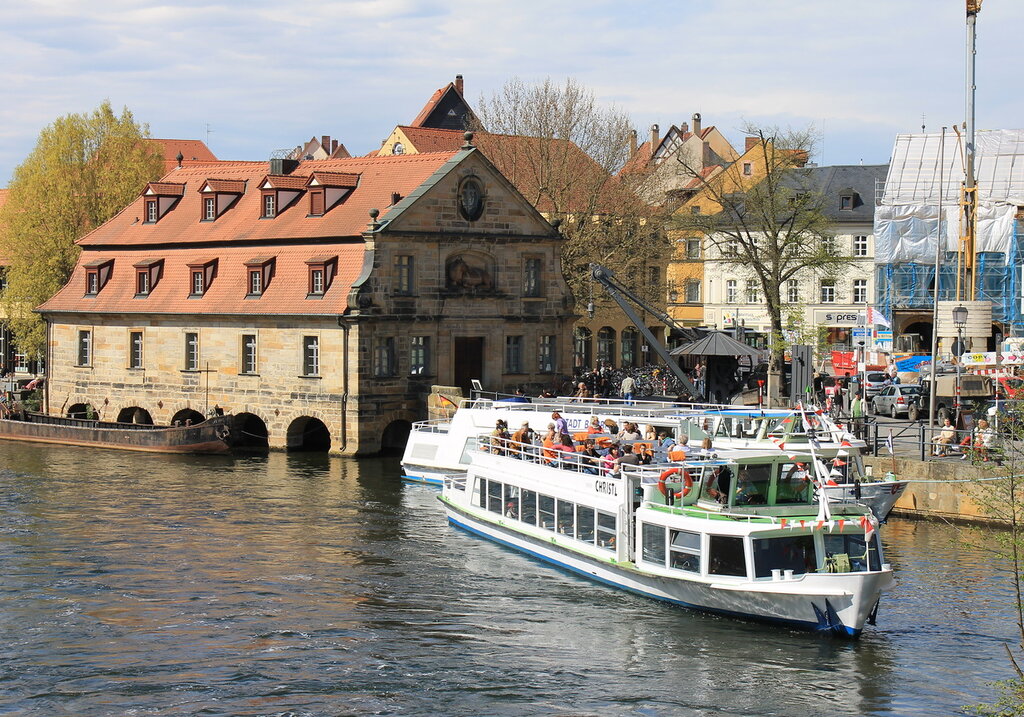 "The Little Venice" quarter, where the facades of the buildings directly to the river. 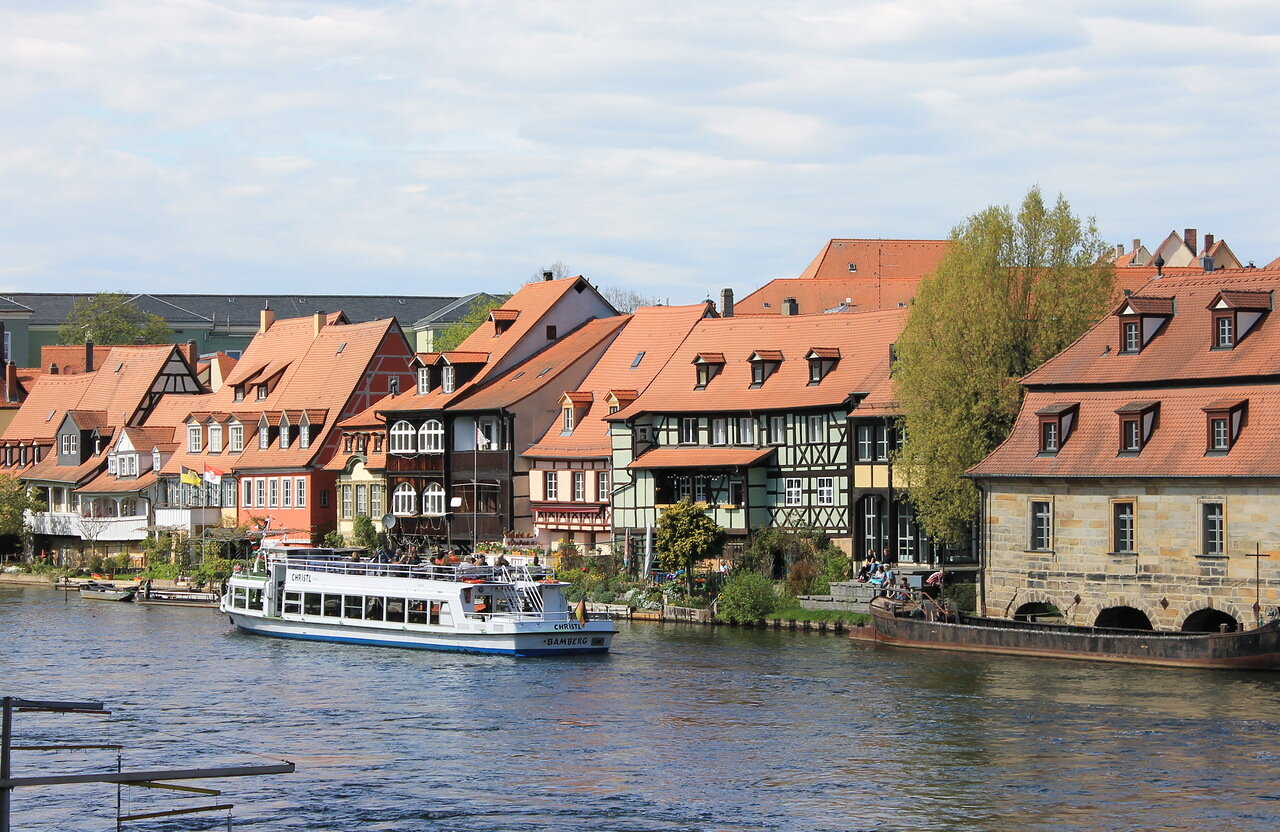 The Western part of the bridge Obere brücke that connects the shore to the town hall island. Behind it you can see the dam of the old mill, standing on Mill island. 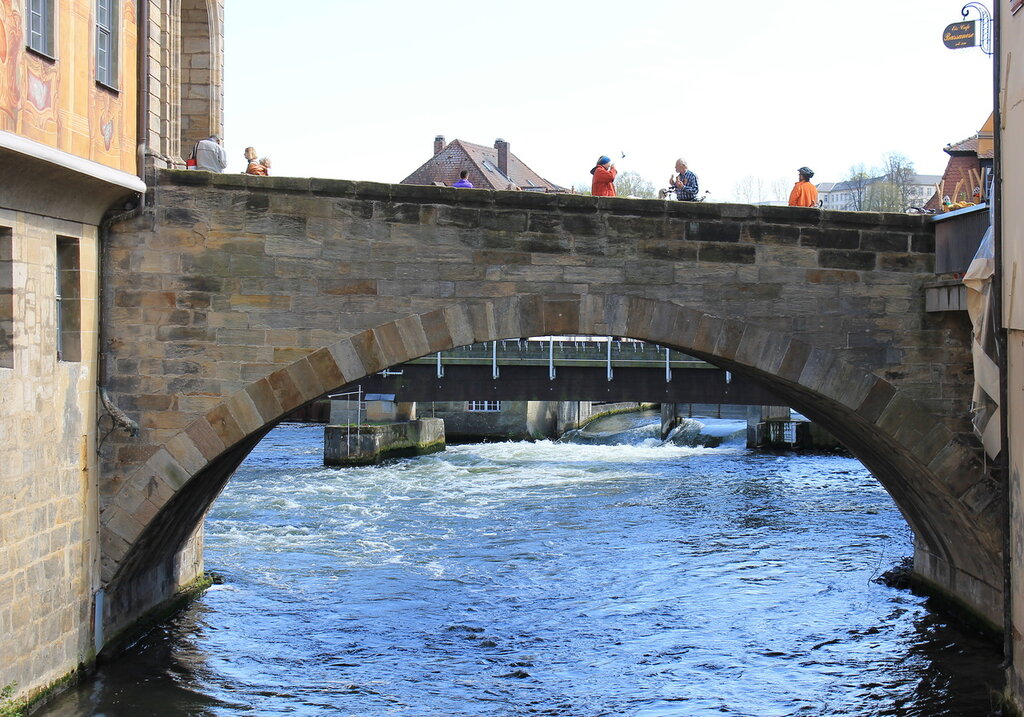 and the Eastern part. Here at rapids, competitions kayakers. 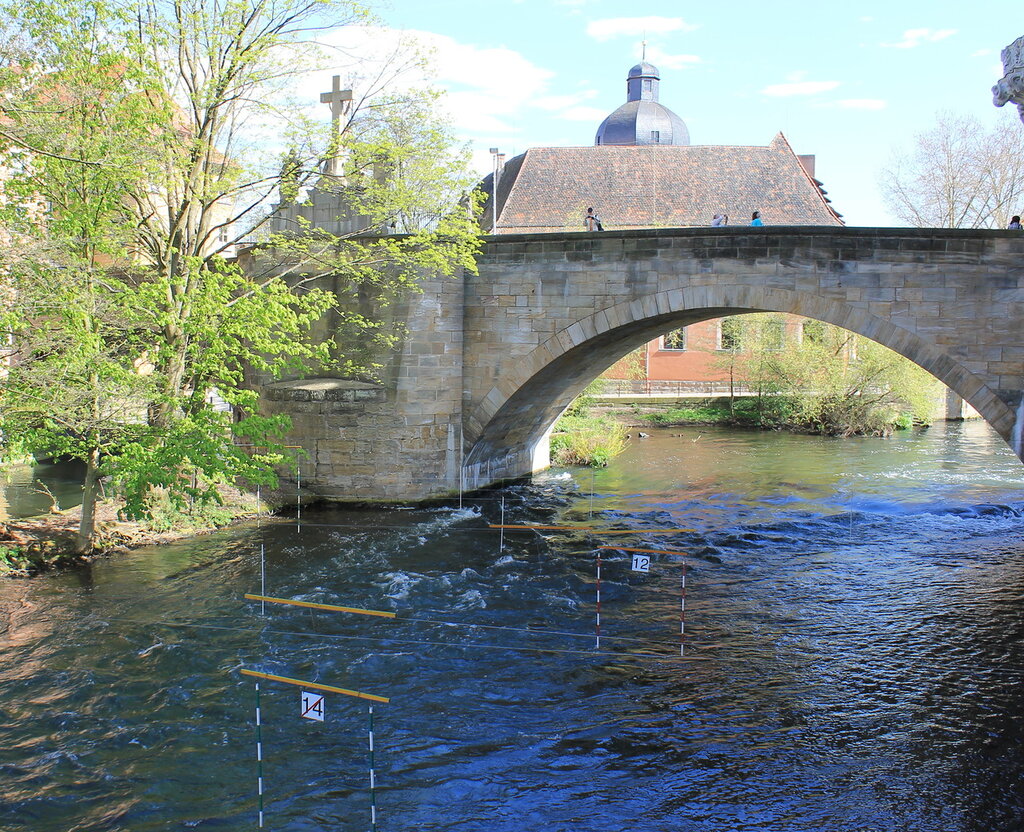 Middle abutment of the bridge stands on the Mill island separating the Regnitz from Mondegreen. 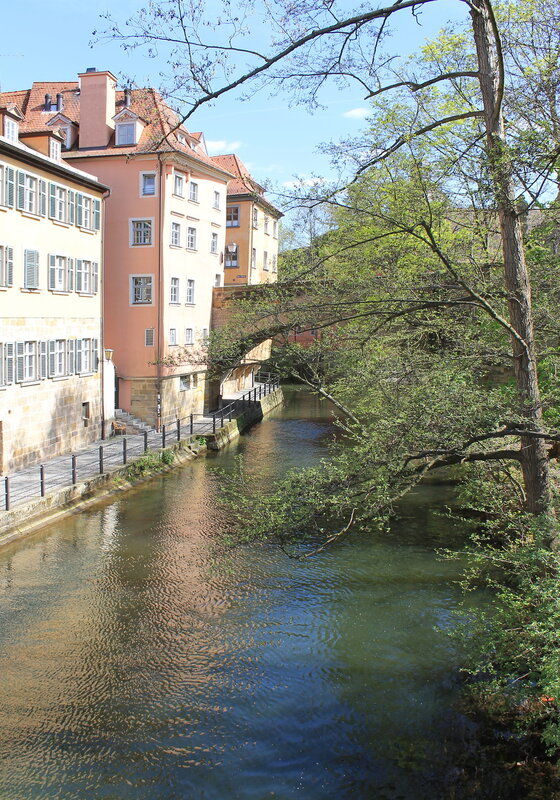 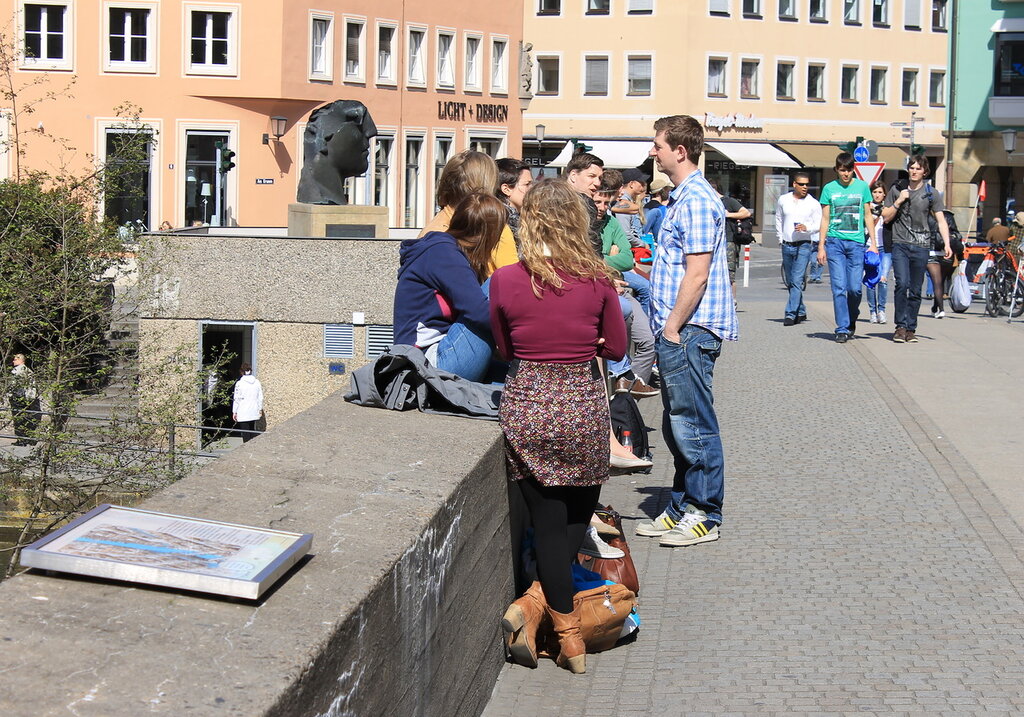 "The Centurion one" sculpture created by Igor Mitoraj in 1981, the Polish artist specializes in sculptures with cut parts that, on his view, to symbolize the destruction caused by the time. So to speak, artificial antiquity...the Sculpture was installed in 2001 and received in the people the name "Halber Kopf" - "the man with half a head". 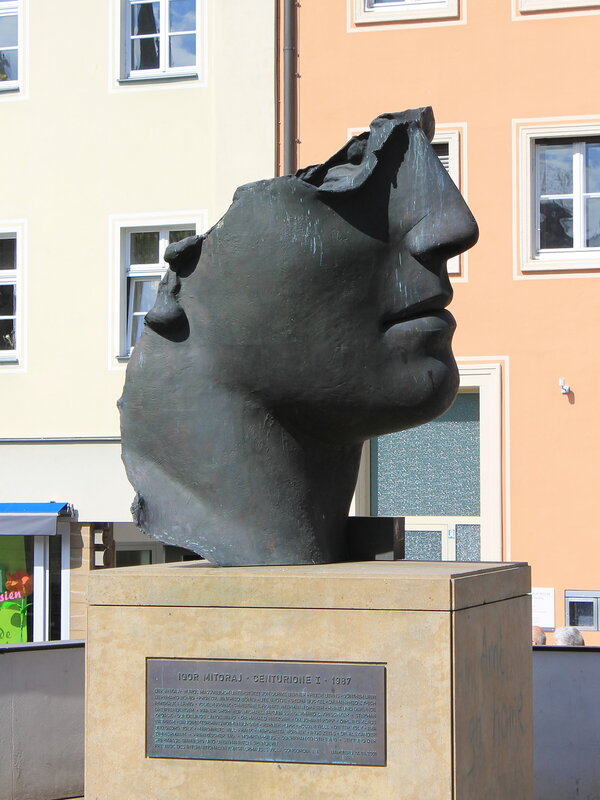